There are four main types of desks and then there are some variations within these but hopefully this will help get you most of the way there.

LEFT OR RIGHT HANDED?
One of the most common questions is which hand do they need. Its best to go backwards to explain. Originally desks were rectangles then typewriters came in and they were put on a smaller desk called a return which stuck out at 90 degrees. If it was on the left of the desk it was a left hand return. So with most desks its the bit that sticks out from the main part of the desk. On an L-shape this is often where the drawers (pedestal) goes.

WHAT IS A PEDESTAL?
Its a set of drawers. Why it is called a pedestal (or ped)? we don't know.

These are also known as radial desks and sometimes crescents. Basically they are L-shape! They are also the most popular as you get loads of space to spread out all of your stuff and as we know, people like to fill all available space.

One of the benefits of a radial desk is that you get a little extra space that you cannot really use for walking around. When you plan a desk space you have to allow for someone to sit behind the desk, so the space used by the return cannot really be used for walk space. So you can use it for desk. Brilliant. 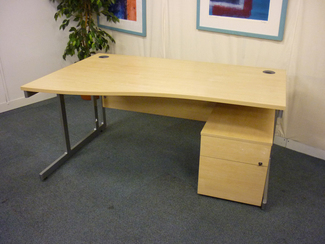 These are a sort of hybrid of a rectangle and a radial workstation. They came about when flat screens started arriving. They are good way of giving you a little extra space where your keyboard goes without filling the room with too much wood.

Generally the shallow end is the standard 800mm deep then the bubble is either 1000 or 900mm deep. 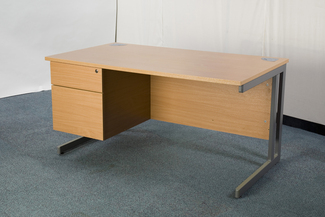 The original style of desk that is making a come back. If you are tight on space or don't need tons of room for paper they are ideal. And as we are now in paper-free offices.....

The standard size for these are 800mm deep. The most common widths are 1600 and 1800mm but we also get smaller ones too.

Sometimes they are also sold in blocks where they have shared legs. These are known as bench desks. Typically they will be blocks of 2 to 6 desks. 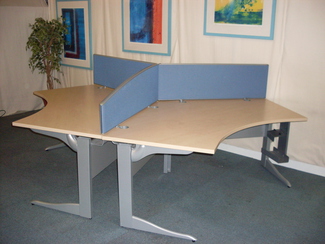 These are really only designed to work in pods of 3 but can be standalone. They work particularly well in long, thin rooms when they are combined into rows multiple pods. The size that we give is from the centre of the pod to the outside but it is tough to give an obvious measurement so it is probably best to ask us and we can email you a plan so that it is clearer.